Cannabis Concentrates - What are concentrates? - Explanation and Complete guide!

Cannabis concentrates are concentrated extracts which are obtained from cannabis plants and which contain very high percentages of cannabinoids (like for instance THC or CDB) and often also high concentrations of terpenes. These highly important ingredients, which are produced in the glistening, sticky resin glands of the plant, largely determine the effect of cannabis. For both recreational users as well as for users which consume cannabis for different reasons, these resin glands, which are called trichomes, are therefore the most valuable.

Because cannabis is a natural product and the production of cannabinoids and terpenes is dependent on a large number of factors, not every plant contains the same amount of these ingredients. The amount of trichomes on a single plant can highly vary as well. So can one flower for instance have produced more trichomes than another flower on the same plant. This might cause a difference in effect which makes cannabis unpredictable. One particular bud of weed might provide a satisfactory result, while another bud of the same plant yields little result.

Furthermore a cannabis flower contains a relative low number of trichomes and consists for a large part of non-active and therefore unwanted plant material. When you smoke a little bud of weed, this means you inhale a lot of plant material of which only a small part is made up of trichomes. When you separate the trichomes from the plant material, you only need to consume a minimal amount and you maintain a constant effectiveness.

The magic is in the trichome heads

Separating the trichomes can be achieved in various ways. The less other material from the plant is extracted, the more pure the obtained extract will be. A piece of hash, which is obtained in a traditional manner, consists of much more trichomes and so is a lot more concentrated than a bud of weed. But in traditional hash often there is still too much contamination by other plant materials as well.

In the last few years huge developments can be seen in the area of extraction methods, in which as much trichomes as possible are tried to be obtained. Since the cannabinoids and terpenes are only located in the heads of the trichomes and not in the trichome stalks, these heads are seen as little factories of the plant in which the magic is created. The magic of the cannabis plant is in the trichome heads

An example of a extremely pure concentrate which is made up of more than 99 percent of trichome heads and in which the cannabinoids and terpenes are largely kept in their original state, is a fullmelt

dry sift. In adddition there are also concentrates which for 99 percent consist of THC, CBD or another ingredient. So these are pure cannabinoid concentrates known under the names isolate, distillate or crystals. All these concentrates are explained later on in the text.

Each concentrate has its own pros and cons. Which concentrate you choose or want to make yourself, is a personal preference which can depend on the purity, the taste, the price, the safety or the method of ingestion. Besides all these differences a distinction can also be made between concentrates for health promotion (by doctor's prescription) or for recreational usage.

Difference between cannabis concentrates for recreational or other purposes

As you have been able to read on the page Types of Cannabis Oils, where the differences between all types of oils are explained in detail, there are also many types of cannabis extracts which are not only wildly popular amongst users concerned with their wellfare, but also especially amongst the consumers with psychoactive desires. A big difference between recreational cannabis oil and other types, is that the oil for other usages is often diluted with oils like olive oil or hempseed oil, to increase the dosability.

Cannabis oil for health usage (supplied through the pharmacy) is preferably dripped under the tongue, while cannabis oil for recreational usage is often smoked or vaped. A well-known term for the vaping of cannabis concentrates is dabbing, which literally means to dab. The concentrates, also often called dabs, are vaped in special pipes called rigs or processed in or on a joint, the so-called twax joint. Since diluting oils effect the taste and on top of that are unhealthy to smoke, a concentrate for recreational use is never diluted. 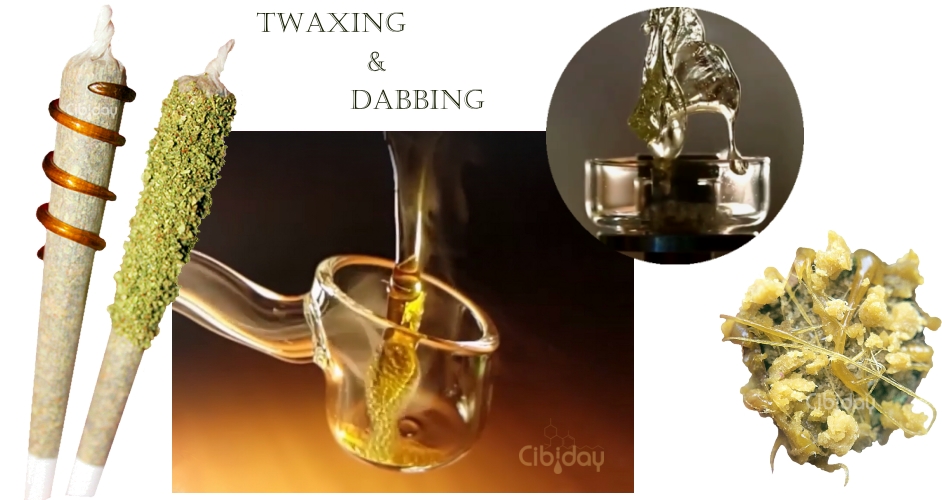 The purpose of extractions from cannabis

Because the flowers are composed of a lot more components, it is desirable to separate the trichomes from the rest of the material (2). Because the cannabinoids and terpenes are only produced in the heads of the trichomes, it is desirable to separate out the stalks and the possible other plant materials. Only then you will have a pure concentrate with a complete profile of active ingredients. The most modern techniques also make it possible to isolate the pure TCH (or CBD) crystals if desired (3), which will leave you with a pure cannabinoid concentrate.

So the extraction ensures you are left with an as pure and potent as possible product with a constant strength, with which not only recreational users wish to raise the quality of life, but also users with different requirements are benefitted by every time again

The purpose of the extraction of cannabis

Because the recreational and health reasons usage (by doctor's prescription through the pharmacy) of THC-rich cannabis (weed) has been popular for longer than the use of THC-poor cannabis (hemp), many different names are known of all kinds of concentrate types from weed. Sometimes different names are given to the same concentrate, like for instance weed oil and THC oil or kief and dry sift. Because these concentrates are mainly popular in the United States and Canada, many of the English terms are commonly used.

The names are derived from the type of extraction method, the texture or the starting material used, but despite all these factors, the cannabinoids and terpenes which are produced in the trichome heads, are responsible for the final effect. Below is an overview of all cannabis concentrates that come from the psychoactive weed plant. Most extracts can however be obtained from hemp as well, although that is still a fairly rare occurrence. An important reason for this is the low proceeds compared to the high manufacturing cost of the extraction.